My son loves experimenting and his latest project was to make his very own drone, you can imagine my face expression when he said he wanted to make his own drone. As a parent, we should always encourage our children to explore their talents, that said, I asked him what he needed, some things were in the house, and some we had to buy. He was so excited to start his new project, he had a plan, and a grand master plan, that he even sacrificed to remove some motors from his old toys, which he would use for this particular experiment. I was amazed at what he had in mind and how he wanted it to be, everything was at his finger tips, so I left him to continue with his experiment, but I kept a close eye just to make sure that he doesn’t get hurt.

After two days, I asked him how its coming along, and he said, he’s almost done, he asks me to even get him a solder gun so that he may solder the motors firmly on. Finally, he finishes his ‘drone,’ but guess what, it doesn’t fly! I thought he would be sad about this, but he wasn’t, I thought he would be discouraged, but he wasn’t; so I asked him what happened and he said, “mum I didn’t use good materials, hence the drone couldn’t fly,” but he went on and said, “mum this is not the end of it, I will try again and again, until I get it right, failure is not an option.” At this am stumped! my son just said that failure is not an option! oh wow! that was very encouraging for me and I asked myself, how many times did I give up on first attempt? how many of us have given up just because someone told us we couldn’t do it. Is failure an option for you?

Critics will always be there, people who will do it better than you, run faster than you, can cook better than you, or even be good looking than you! But this one thing remains, they can’t be you, no one can! We are all unique, but many a times when we fail, we like to look at other people and think that we will never make it in life! wrong! The first thing that we need to do is change our attitude, change our mindset and believe that we can do it! believe that we will achieve our goals and dreams, if we put God first, work hard and the results will eventually come in. But what happens when we don’t try? what happens when we try once and don’t try again, all because we failed the first attempt! Most of us be like, ‘its hard, its complicated, well who said life would be easy? 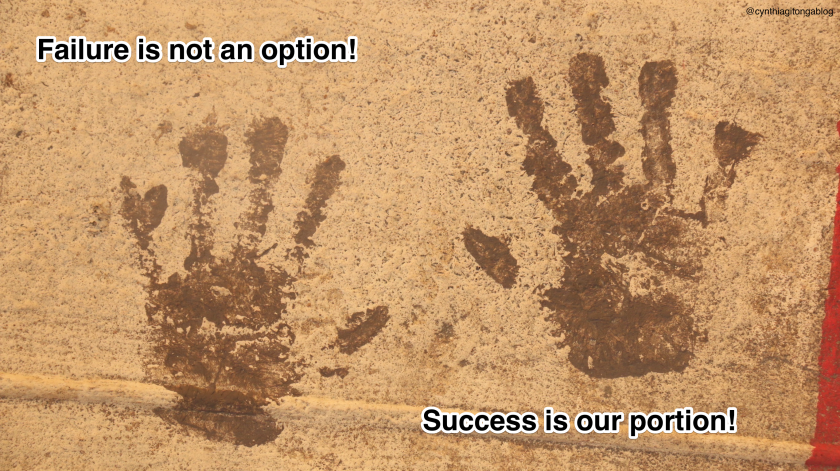 Giving up on yourself is the worst thing that we can do, when we give up, we show the devil that he has won, yet your victory was just around the corner, but you gave up, you threw in the towel and thought it was the end of the road for you, yet God allowed that particular situation to come your way to make you stronger. But what do we do? we don’t see the bigger picture, we allow the stress of life to completely overwhelm us.

I learn everyday from my boys, they fall down but they never stay down, they get up, dust themselves up and keep moving. Will you do the same when you fall? or will you make a pity party out of it? In the words of my son, “Failure is  not an option, success is our portion” this should be our motto through life. Don’t look at your life through the eyes of another person, but rather look at your life through the eyes of Jesus, He wants the best for you and He knows whats best for you.